Water is critical to the life and health of every living being on Earth. Since the 1990s, the world water crisis has become mainstream news and major efforts have been geared at cleaning up the problem and provide safe drinking water to the world. With incidents like Flint, Michigan, although it is not the first large-scale public tap water problem, more attention tends to be paid to the safety of drinking water. While the United States government does require water testing and sets minimum standards for the quality of water flowing into homes, this does not mean that it is always safe —there have still been widespread violations, lack of reporting, and contaminants that aren’t regulated or monitored by the Environmental Protection Agency (EPA). But, with all this talk and fear about tap water quality, what makes tap water unsafe to drink and what can we do about it? 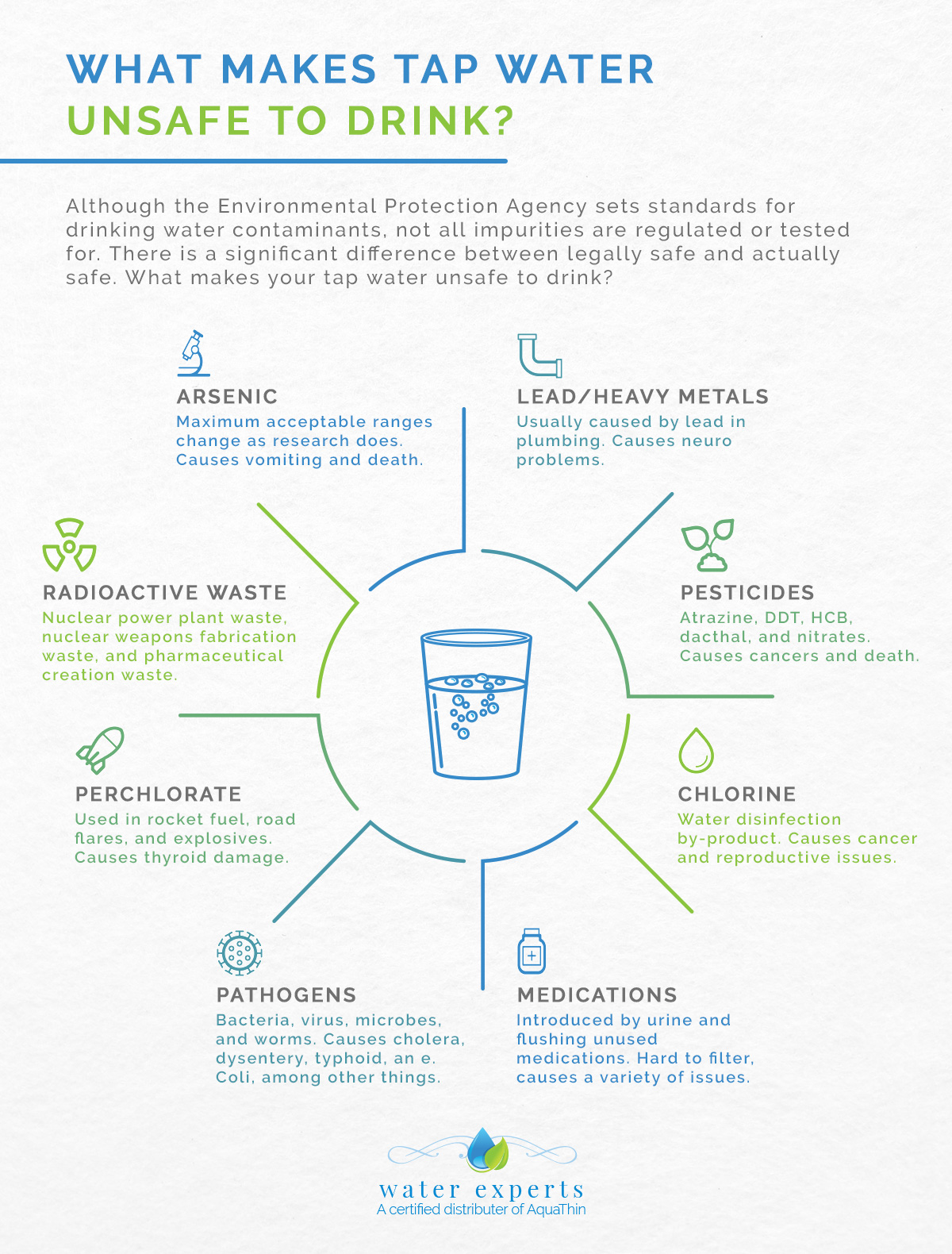 What’s in the Water?

Even water that was collected from the purest of collection points, there will be something other than hydrogen and oxygen in the water. But, what is in the water and what is a problem?

Pathogens such as germs, bacteria, virus, and other microbes are the most common contaminants of water worldwide and cause the most water-borne acute health issues. Health issues caused by water contamination include cholera, dysentery, typhoid, polio, e. Coli, worms, and snails. Most waterborne pathogens are introduced into the water supply through human feces. The World Health Organization (WHO) suggests that approximately 14 percent of drinking water sources in the developed nations and closer to 52 percent in areas like Africa are contaminated with human feces.

Lead gets a very bad reputation for contaminating water and the damaging health effects it causes. Lead, as with any heavy metal, when ingested can cause neurological problems that cause learning and behavioral problems in children. Heavy metals have historically entered tap water through pipes and plumbing. While it is assumed that newer pipes are lead-free, it isn’t exactly true and they can still contain significant amounts of lead. 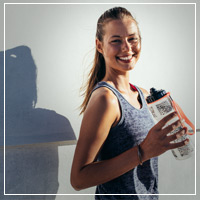 The most common pesticide detected in American tap water is atrazine, which is still currently being monitored and researched to figure out the health risks to those who are exposed. While we do not yet know the full effects of atrazine exposure, we already know that ingesting pesticides can be dangerous to human health. Large concentrations of nitrates left behind by fertilizers, which are incredibly harmful to pregnant women and developing babies, prove to be fatal in some cases. Other pesticides and insecticides that have been found to cause issues in humans are Dichloro-Diphenyl-Trichloroethane (DDT), which was banned in 1972; Hexachlorobenzene (HCB), which is also banned; and Dacthal, which is still in use today.

Chlorine and its by-products are common in tap water because chlorine is used in the disinfection process. In small quantities, these products have proven to be relatively harmless, however, in large enough quantities can cause cancer and reproductive issues.

Perchlorate is a very toxic chemical that is used to make flares, explosives, and rocket fuel. In at least 26 states, perchlorate has been detected in drinking water, but the actual number could be higher since there is no federal standard for this chemical, so it is not regularly tested for. Perchlorate can disrupt thyroid hormone production which can cause a variety of health concerns in people.

Pharmaceuticals are introduced into the drinking water supply when unused medications are flushed down the toilet or sink and through the urine of those who use the medications. For many decades, flushing unused or expired medications was standard practice. However, through research, it is suggested that this is an incredibly dangerous practice. While water purification removes most harmful toxins, there are some elements in medications that are not completely removed. And, while some side effects of the medications are nothing more than an irritation, some can be fatal if ingested by the wrong person.

Arsenic, also commonly referred to as rat poison, has always been a threat to our drinking water supply. The EPA did set regulations regarding acceptable arsenic levels in the 1960s. However, since then, research has shown that these levels are much too high for safe drinking standards and were changed in the 2000s.

While the most radioactive material that enters drinking water sources is natural and in relatively insignificant quantities, where there is radioactive waste overflow, it can present a very dangerous situation to nearby water sources. At nuclear power plants, nuclear weapons creation areas, and pharmaceutical fabrication plants, improper storage or leaks can cause dangerous amounts of radioactive material to enter the water. Radioactive waste can cause kidney failure, cancer, and death.

So, What Water is Safe to Drink?

In the United States and globally, an emphasis has been put on creating clean drinking water for people. Public drinking water is collected from surface and groundwater sources and treated to remove impurities. It is estimated that nearly 90 percent of the world now has access to improved drinking water, which is a huge leap from a few decades ago. However, improved does not always mean clean, nor does it mean safe. It simply means that the water is cleaner than the original source and efforts are made to keep toilet water, bathing water, and drinking water separate. Many people make the mistake of believing that bottled water is cleaner or safer than tap water, however, the standards for bottled water are the same as for tap water. The only difference is, it skips your plumbing system and it is tap water from wherever the water was collected, rather than your local water. Additionally, the plastic used to make water bottles releases a chemical, bisphenol A (BPA), which is a carcinogen that acts like estrogen in the body. The best thing that you can do is to drink water that has been treated with reverse osmosis, distillation, or a filter. A reverse osmosis filter system that includes carbon filtration is your best bet for filtering out the most contaminants and offering the cleanest, safest water.

At Aquathin NJ, we are passionate about providing clean, safe water for as many people as we can, especially residents in New Jersey where we are located. We are New Jersey’s trusted source for water purification and have some of the best technology for reverse osmosis plus deionization. For all of your water purification needs or for more information about the drinking water in your area, contact us today!